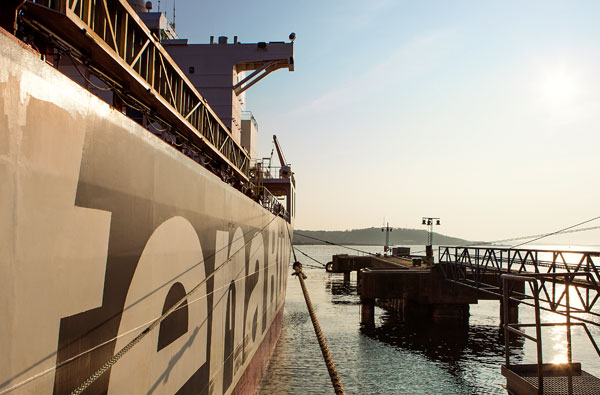 We continued to deliver good earnings during the quarter, even though the overall market was slightly lower than in the same quarter of 2015. The employment of our vessels was high, with successful chartering. The underlying drivers included generally good demand for oil, which in turn was driven by the low price of oil.

During the quarter, we decided to take advantage of the higher time charter market levels and to employ another two P-MAX tankers on time charters. One of the vessels, which is chartered out for a year, will be mainly used for the transportation of light oil products to West Africa. The other vessel, which is out on a three-year charter, will be mainly used for imports of light oil products to South America.

The contracts enabled us to exploit the momentum in the market. In a short period, we have now chartered three of our ten P-MAX tankers in addition to our already successful consecutive voyage contract in the Far East – and we are assessing the feasibility of more, similar arrangements. The contracts are fully in line with our chartering strategy. We ensure a good level of income for the vessels during the relevant period, while increasingly balancing the exposure to the spot market.

Higher ambitions for work on sustainability

With effect from this interim report, we will be continuously reporting a number of key indicators with a bearing on safety and environmental improvements. Our efforts in the area of sustainability are – and have long been – significant. We are now also raising the ambition level in reporting. The goal is to be entirely transparent. More information can be found on page 7.

During the quarter, there was a continuation of discussions aimed at achieving a possible conciliation procedure regarding the dispute that arose from the grounding of Stena Primorsk in the Hudson River in December 2012. These will also continue during the second quarter of 2016. More information can be found on page 6 of this interim report.

Our fundamental view of the year is positive. We expect the low price of oil and continuing changes in the global refinery infrastructure to result in stable demand for transportation in the period ahead of both oil and refined oil products. However, it is worth pointing out that inventory levels are high, which could affect demand. In conclusion, it is our assessment that the 2016 market will be good, but probably not as good as 2015.