So, when is the turnaround coming...?

We are now into September and the overall tanker markets are still weak. We have long talked about a gradual improvement of the market during the second half of 2018 – and do not see any need to revise this view. Oil stocks have now, as we wrote in our last Market Update (21 June), fallen to an average five-year level, and we expect oil shipments to increase during autumn.

Continuing weak markets in spring and summer were also largely due to low production in the OPEC countries. Production was periodically even below the levels agreed by the countries in 2016. All in all, this brought exceptionally poor conditions for the tanker markets.

However, in June, OPEC decided to resume production in accordance with the agreed quotas – which means an increase of 500,000 to 1 million barrels of oil per day. The increase will take place gradually during autumn. In addition, Russia will also increase its production by 200,000-300,000 barrels of oil per day. This is the key to our view of gradually increasing demand for tanker transport. The tanker market is by its nature tight and even small differences in volumes can cause major changes in freight rates.

This view is, of course, shared by the various players in the market – for example, the shipbroking and analysis company Fearnley Research recently wrote:

“We believe we are close to an inflection point for tankers (NB deliveries slow down/production cuts reversal from OPEC and Russia/oil production growth picks up pace) and see a lot of similarities with what happened in 2013 when VLCC rates moved from under USD 10,000/day levels in August to close to USD 50,000/day in December.”

We also believe that increased production in OPEC and Russia will compensate for sanctions on Iran. 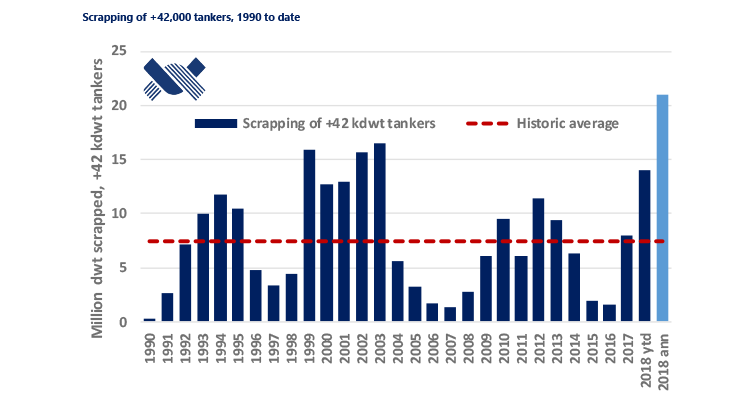 Have we already begun to see signs of improvement? Yes, in some segments we have started to see some more cargoes. Among other things, increased exports of Russian oil from Baltic ports have benefited the Aframax segment, which has gone from average voyage earnings of approximately $5,000/day (record low) in the first half of the year to between $10,000 and $15,000/day during summer. Still low but even so, a step in the right direction. In parallel, Saudi Arabia has increased exports, which has favoured the VLCC segment in particular. From an average of about $8,000/day in the first half of the year, VLCC voyages between MEG (Middle East Gulf) and China generated about $9,000/day in July and reached about $14,000/day in August. We have not yet seen the same development in the product tanker segment, but with a continuation of declining product inventory levels, we still believe it will materialise in the next few months.

In the last update, we mentioned the increased phasing-out of vessels through recycling (scrapping). This has continued during summer. Low freight rates, high scrap prices and upcoming investment decisions on statutory ballast water systems and possibly also scrubbers (exhaust gas cleaning systems) are contributing to more and more scrapping decisions. If this activity persists, we may even see a zero-growth rate in certain segments this year. This will obviously also contribute to a market that is in better balance.

So, in conclusion, we still believe that the markets will gradually improve during autumn. Our basic analysis is therefore based on the following: